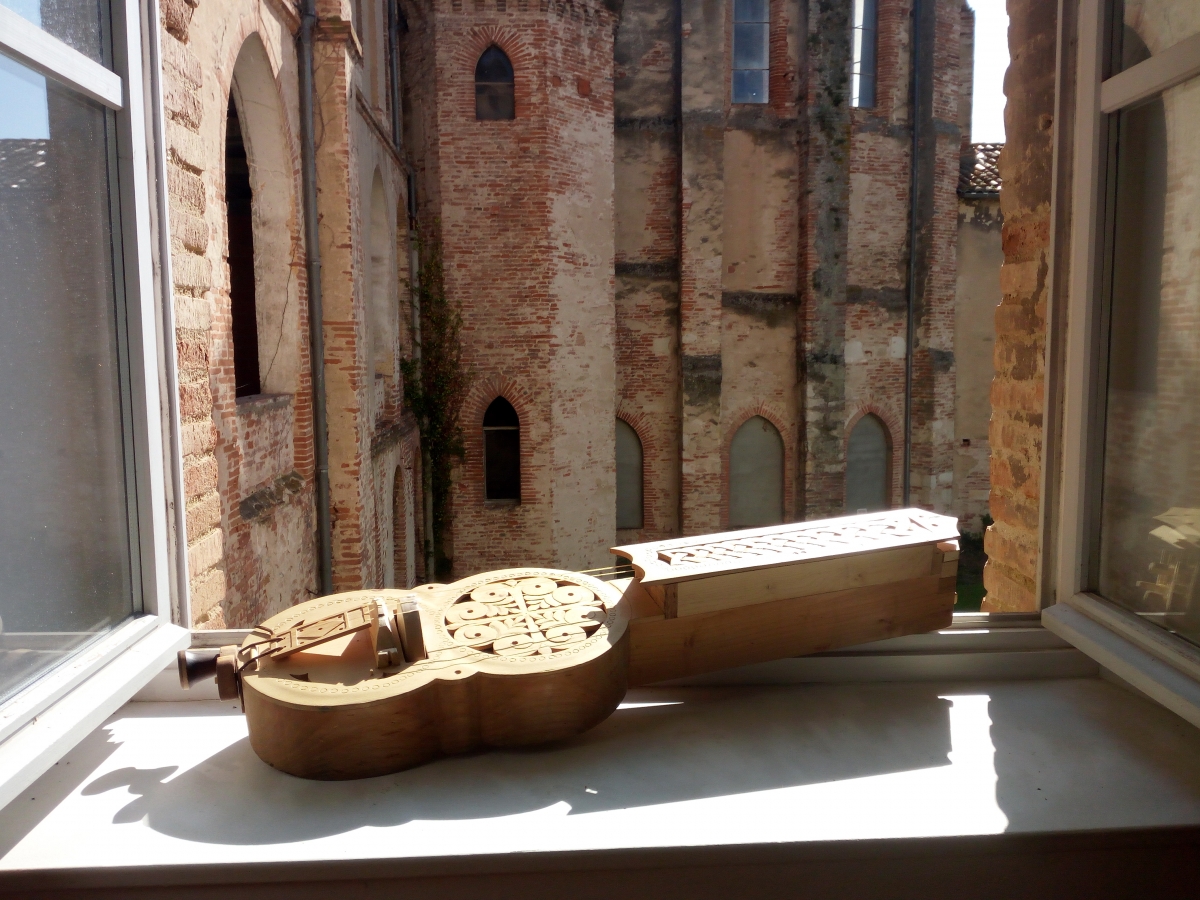 (Inquiry into a troubling problem of interpretation.

In former articles, I wrote both about different aspects of this problem and discussed practical means to build an acceptable replica of the instrument. My aim is to deal not only with organological and technical subjects but to examine musical ideas connected to them, the way Music was considered both as an art and as part of the mathematical knowledge of Nature, since Pythagoras to the Middle Ages and further.

Several researchers have already carefully studied the few witnesses related to this instrument. I am not going to repeat the whole list, I just want to offer a short survey here.

We can find many features common to all specimens: the soundbox, consisting, as usual, of two oval/circular parts plus the neck, three strings are stretched along this body, then a keyboard showing 6 to 8 keys within the half of the diapason, sound holes are often in a D shape. The keyboard mechanism is depicted only once, in an 18th-century copy (Gerbert) of a 13th c. deperditum  manuscript: 8 revolving keys and the list of the notes, from C to c (including Bb and B) are clearly visible.  This drawing tells us clearly that one of the strings, (maybe all the three strings) was in C and that the three strings were touched by each key at the same time following a diatonic scale. 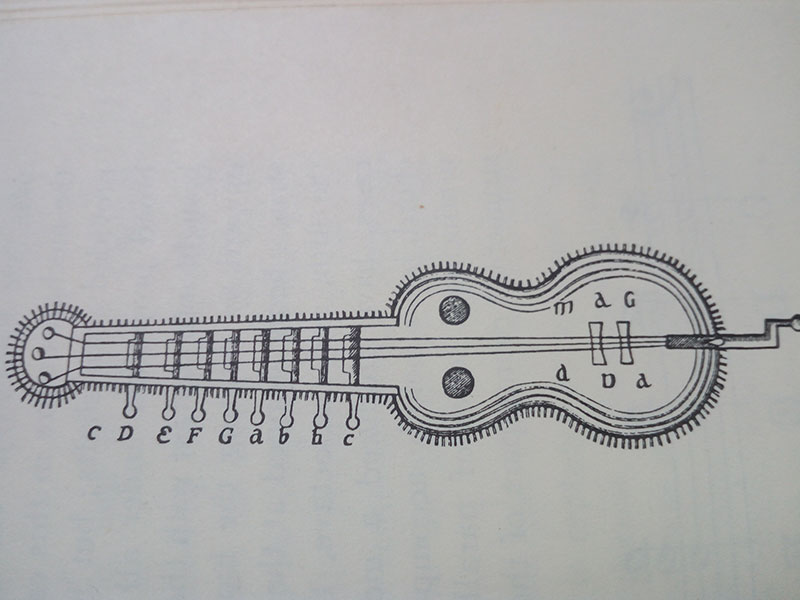 Another well known 13th-century manuscript entitled “Quomodo organistrum construatur” illustrates the method to divide the monochord into the eight stops of a diatonic scale starting from Ut, but we don't find a description of the instrument nor information about its use. Scholars guess it was played mainly for sacred music along the 12th century. Christopher Page, the only one who faced the problem of the name: Symhonia / Organistrum, has several doubts about and no definite answers.

We know that almost all depictions and witnesses belong to the 12th century, but the year and the decade are mainly unknown. Since it is impossible to follow an exact chronology we cannot pretend to outline the evolution of this instrument. To study carefully the observable features is the only serious way to face the subject.

In Ahedo de  Butron (Burgos) sculpture, one of the musicians might be turning a crank with his right hand, while with his left-hand forefinger he is actually touching the second string; the second musician is touching the third string with his right-hand forefinger and with the other hand is turning the corresponding tuning peg. There is no evidence of a keyboard (as in  Hortus deliciarum manuscript), then, since there is no trace of crank and wheel, I guess the two musicians are just tuning a long size Viella. 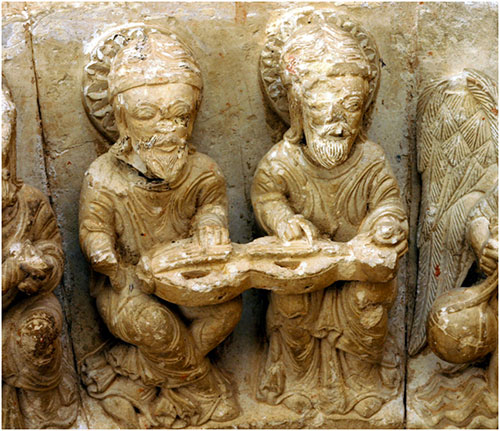 In Soria sculpture (Spain) we observe only one string (?), no bridge, no wheel, no keys. The musicians look as they were actually turning a wheel and pulling the keys, but the damages suffered by this sculpture do preclude a clear observation of details. On the contrary, the similarly shaped instrument in Boscherville capital (France) presents crank, tailpiece, wheel, and keys. 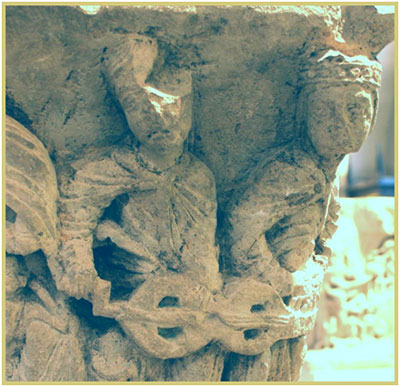 What was this wheel intended to do, but to produce a continuous sound? This is the first observation with musical relevance in our description. Now, suppose we have built a long size Viella, about twice the size of a usual one, with a wheel in it: one of the two musicians can stop the strings all along the neck with his fingers, but he is not at ease cause his fingers interfere accidentally with the other strings. This is why a system of keys might have been suggested. In some depictions they appear, 6 to 8 within half of the diapason. They look like flat bars passing beneath the strings (Boscherville and Vercelli) or we can see the top of them protruding from the lid that hides the inner mechanism. That these keyboards were designed for a diatonic scale is out of doubt. The question is: were the bars equipped with tangents in order to operate on one string only or more than one?

The structure of the keyboard depends on which kind of music we are going to play.

Suppose we’ve got a musical instrument which can produce a continuous sound and we want to perform a slow melody with it, the following arrangements could be adopted:

Type 1: all the keys touching the treble string, the other two acting as drones,

Type 2: the keys are provided with double tangents to stop the treble and middle strings tuned a fifth or a fourth apart, leaving the bass string free, tuned an octave under the treble, in order to play melodies organum parallelum with drone accompaniment (this is a frequently adopted solution in modern replicas)

Type 3: (according to Gerbert’s drawing) all  keys acting on the three strings simultaneously either to play in organum parallelum (Strings tuned a fifth or fourth and an octave apart)  or to play a simple melody on the  three strings tuned at the same pitch (my favourite solution)

Type 4:  all strings tuned at the same pitch, the tangents acting on different strings in order to play some double stops within the octave as follows: 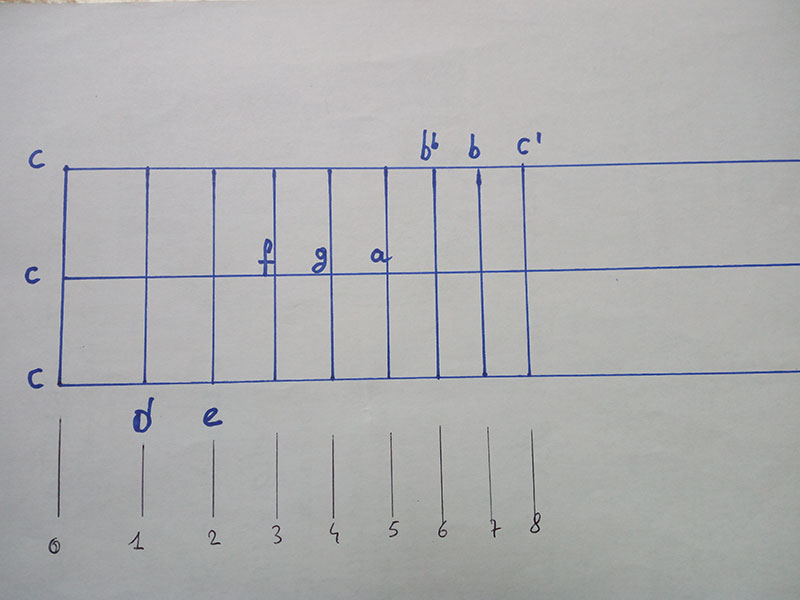 Which of these types is the best has to be determined only by considering what we know about 12th-century music.

The geographic area includes Spain and France mainly, then England, Germany, and Italy. All scholars suggest that his instrument served the sacred music composed and performed in Benedictine monasteries. Which way? The monks were developing a new technique in polyphonic singing:  the vox organalis was no longer in parallelum,  not attending the rules given by Musica enchiriadis and Micrologus,  and became freer.  How could an instrument like the described “Two men lyre” fit this kind of music? In any case, providing very limited help: playing the tenor only, for instance, as a ground reference for the upper voices in early polyphony. The same limits and role pertained to the romanesque pipe organ (see J.Ferrando's article in: L'nstrumentarium du Moyen Age. Paris, L'Harmattan,2015). This is why the Organistrum was abandoned and the organ keyboard was improved during the 13th century. Composers began writing sacred music for three and four voices, a repertory that could be performed by very well trained singers, doing without any instrumental accompaniment.

At the top of the Gate of Glory in Santiago de Compostela cathedral magister Mateus sculpted a wheeled instrument in the middle of the range of the 24 Elders of Apocalypse all around the Lamb. This gate is dated precisely the year 1188. This specimen differs from all others we have examined

The soundbox consists of two perfect circles connected through lobes and a rectangular box containing the keys. The string length is equal to the circumference of circles. Four triangular sound holes with little holes at the edges are cut in the first circle. A large quadripartite rosette with vegetable decoration is carved in the second circle. An interlace decoration made of 11 knots and 12 spaces is cut all along the rectangular keyboard lid.

Some of these features are unique among all depictions of the instrument. In other articles, I examined these characteristics in the light of musical theory, astronomy, and cosmology of the time. In this paper I would like to focus on the interpretation of the keyboard with 11 keys within the octave, describing a possible reconstruction of it.

Many important scholars stated that this number indicates a chromatic division of the keyboard. Although they are aware of the fact that no chromatic scale was in use in the 12th-century music, they accepted as a piece of absolute evidence that this abnormal chromatic keyboard was been used for transposition.

Actually, some other chances are conceivable.

Keeping the 11 keys as they are, we can design 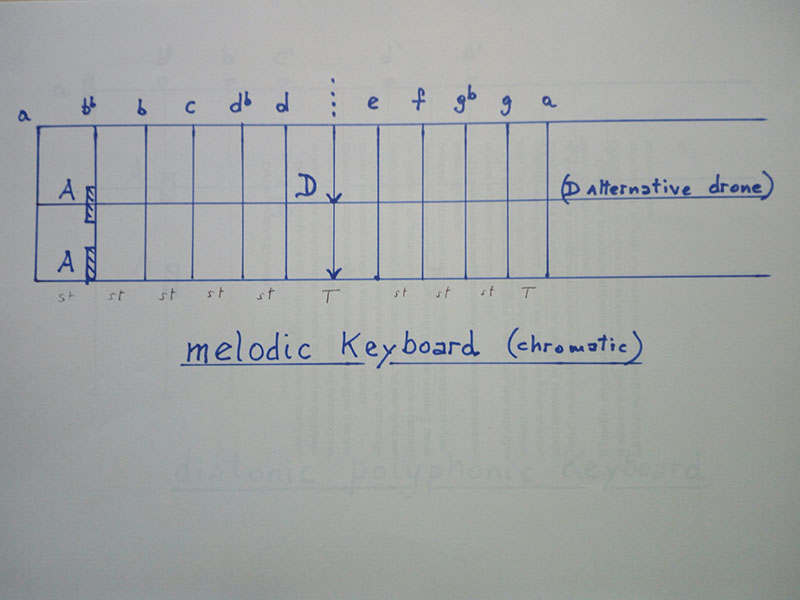 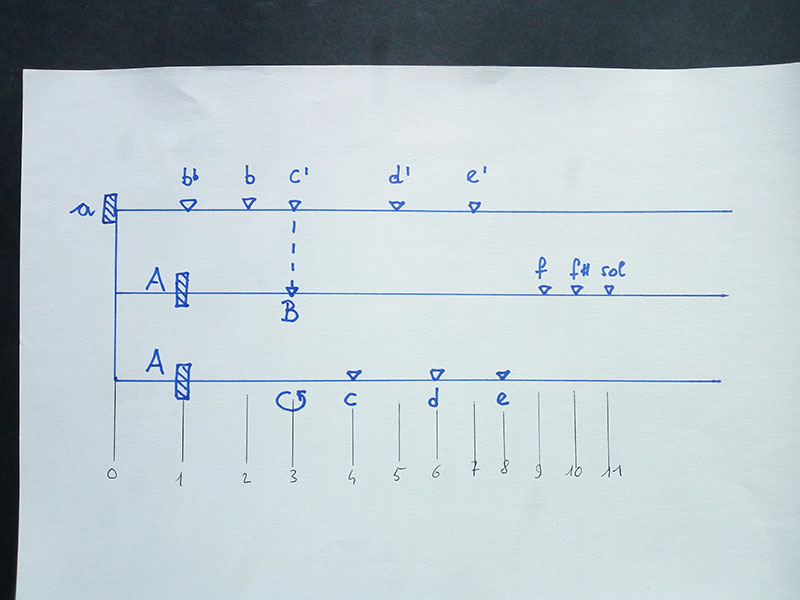 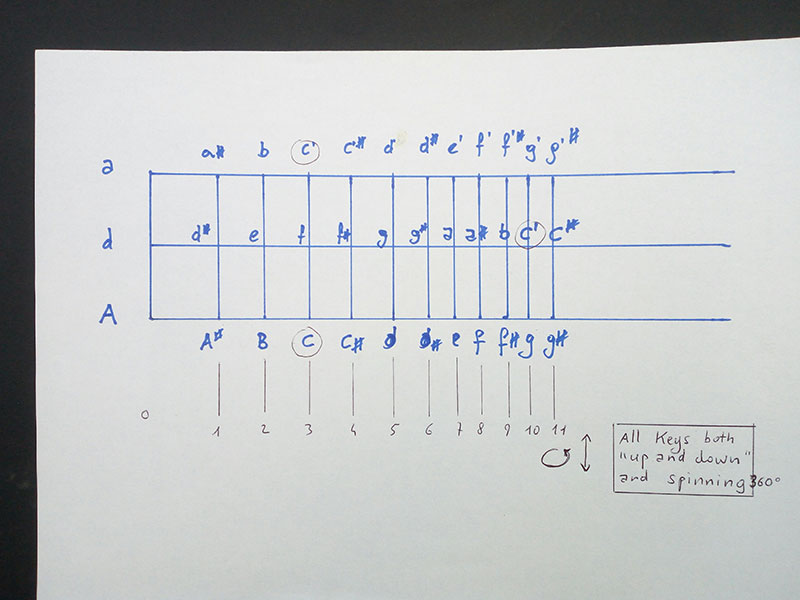 This keyboard, being rather anachronistic, does allow to transpose whatever two parts polyphony of the time into any desired mode.

Please listen to the musical example:

About the chromatic keyboard read more on:

This report gives rise to more doubts than certainties.

Santiago instrument looks like the more complicated version of the wheel instrument documented for few decades during the 12th century, whose main relevance was due primarily to the continuous sound produced by the wheel, secondarily to the keyboard mechanism.

This subject keeps on being problematic in many respects.

First of all: the keyboard. Although some of the 12th century “Two men wheel lyres” might even lack the keyboard, as witnessed by two iconographic samples, we cannot state whether the keyboards we observe in the majority of the specimens were melodic or polyphonic. Though not probable, the use of a chromatic system could be suggested by the very special depiction of Santiago de Compostela, to be considered, in any case, as an extreme step of evolution of the instrument.

The “Two men lyre”  practically disappears from iconography at the beginning of the 13th century. Church services probably did without it, and the instrument survived into a smaller form, playable by one performer, being equipped with a more practical (melodic/polyphonic?) keyboard, to serve secular music. 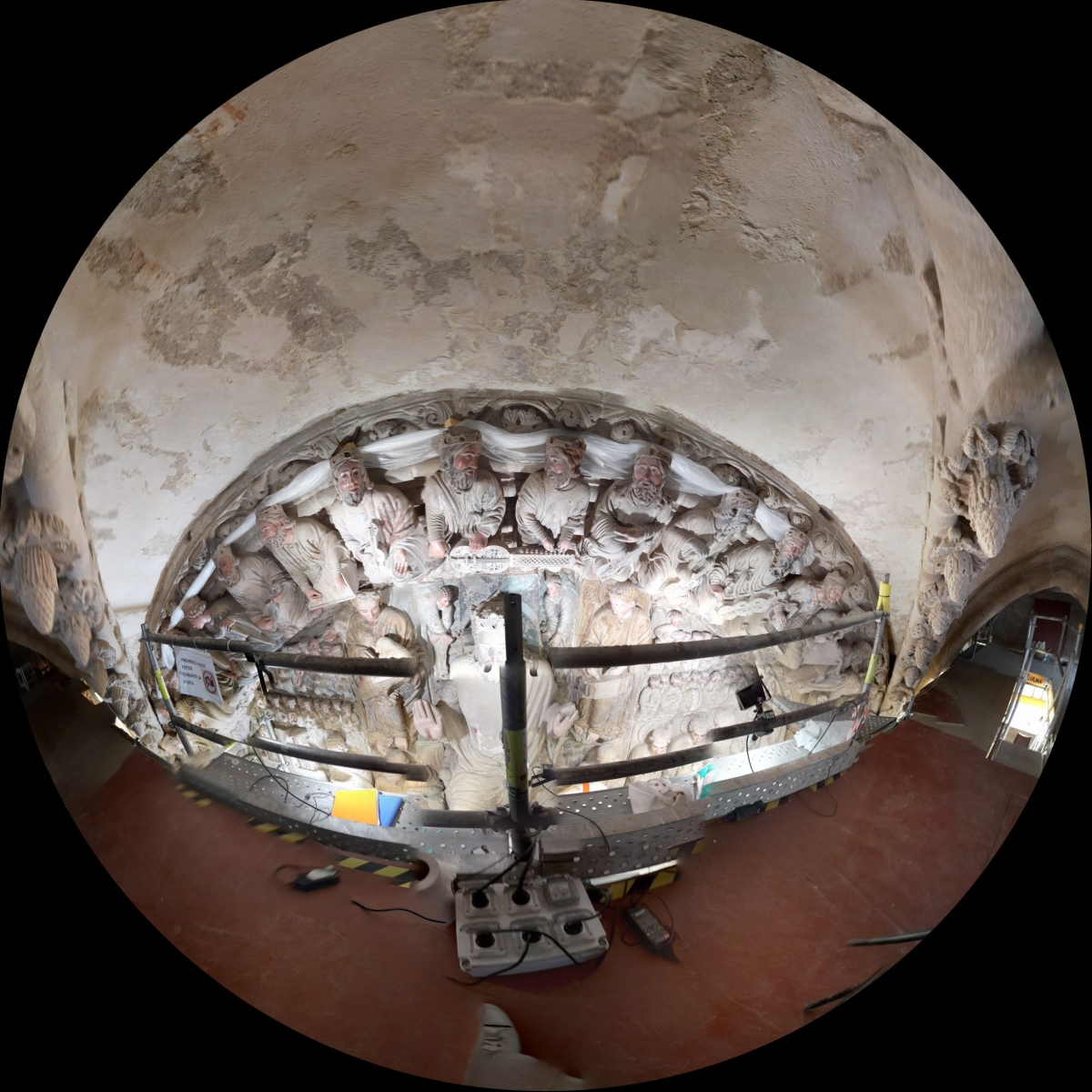 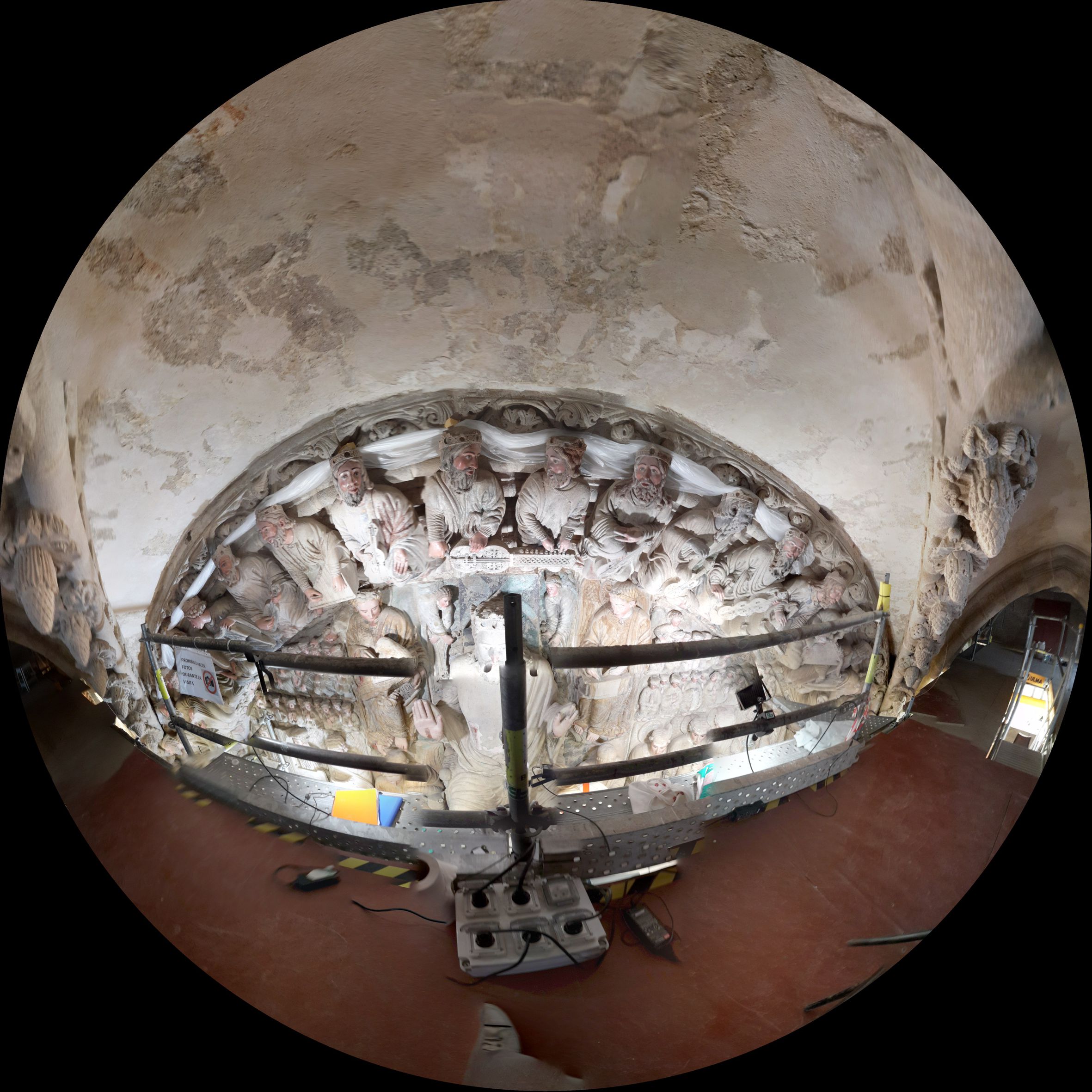 (Thanks to Alejandro Gangui for original pictures of the Portico) 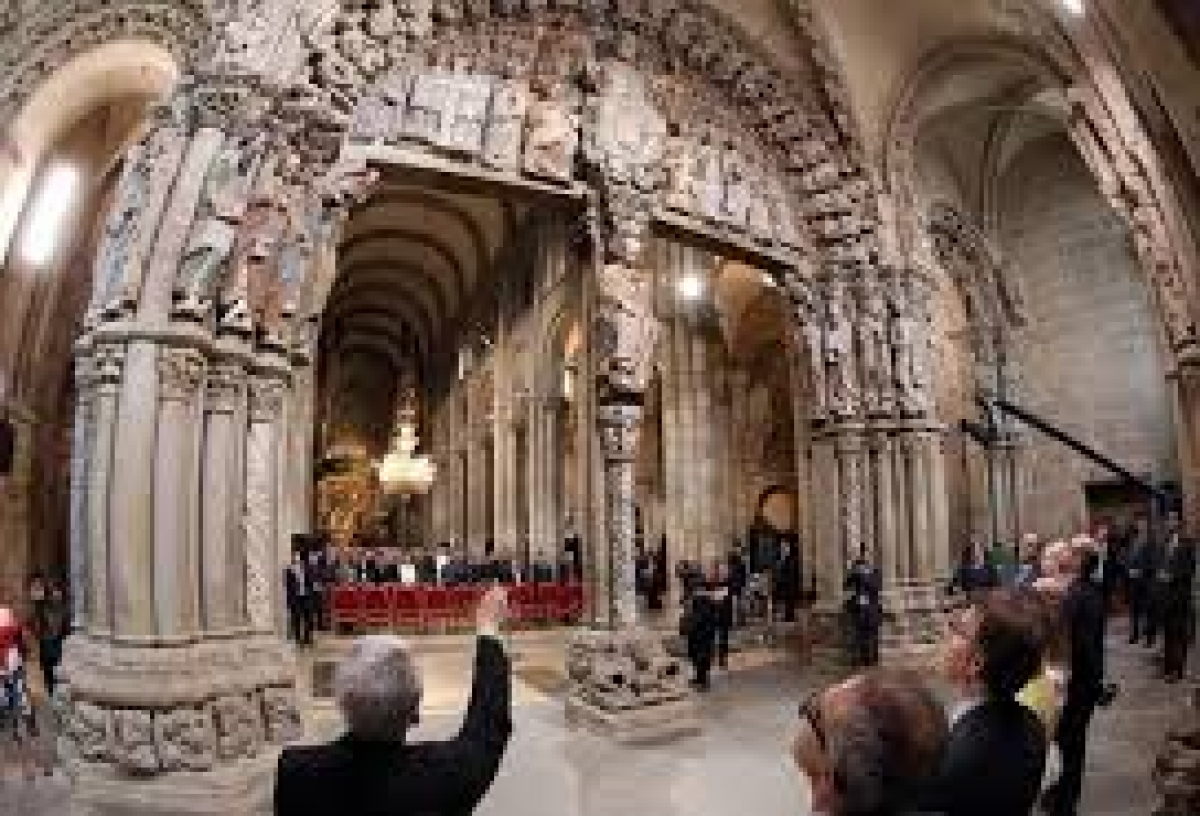 On 2018, July 12th the famous Gate of Glory in Santiago de Compostela has been re-opened. This extraordinary document of art and thinking still leaves us astonished and admired. The many colours of the original gate have been partially restored, giving a new look,a new surprising light to the monument.

At the same time NEW researches have revealed that a polyphonic experience lies behind the depictions of musical instruments in the hands of the 24 Elders of the Apocalypse, all around the arch. 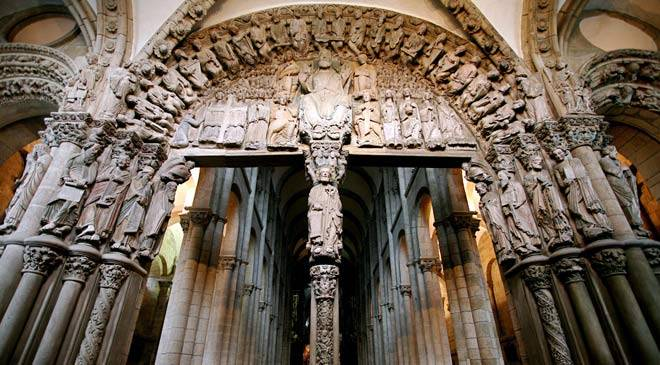 All instruments are depicted in couples (2 harps, 2 lauds ...etc.) suggesting they can be played in duet. The so-called Organistrum, at the top of the arch, played by two musicians, shows a chromatic scale, thus indicating a possible extraordinary evolution in musical thinking at Santiago de Compostela during the 12th century. 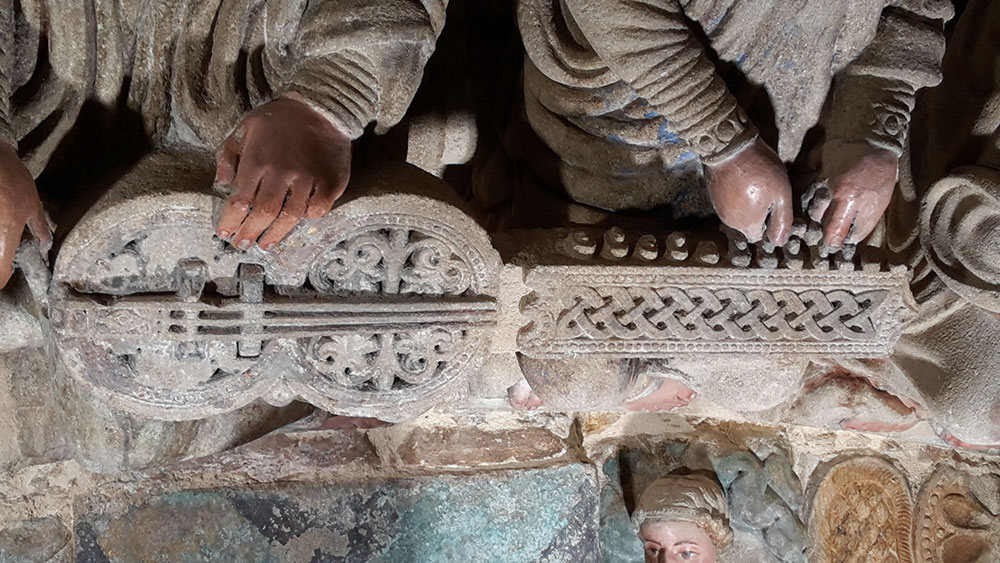 Then, two-voices compositions in Codex calixtinus witness the developement of Polyphony at Santiago in the same age.

In our studies we have clearly demonstrated that Portico de la Gloria top instrument is a SPECIAL ONE, different from any other "two men lyre" known. In fact, its chromatic scale, quite useless for sacred music at that age, has suggested us the creation of a POLYPHONIC KEYBOARD that serves perfectly 12th century  new polyphonic repertory. If the first "two men lyre" with its diatonic scale could help may be accompanying simple polyphonies such as those discribed by "Musica enchiriadis" and "Micrologus", SANTIAGO's INSTRUMENT is the improvement of it, the herald of a new musical world.

This shed a new light over the whole Portico della Gloria music instruments setting: the couples are actually showing a polyphonic idea, not following only a sort of scenical arrangement.

Such as nowadys "chromatic restoration" of the gate: everything there shines in a better light !

please watch to our videos: